FRANCIS X. SUAREZ EXPLOITS THE MISFORTUNE OF A POOR HOMELESS MAN FOR A PHOTO OP SO HE CAN PORTRAY HIMSELF AS A CARING MAN OF THE PEOPLE

Much of what Suarez posts on social media falls within the category of self-promotional drivel intended to bolster the persona of a dynamic and influential leader unrelated in reality to the ineffectual and ceremonial mayor that he really is.

The above photo wasn't based on any sincere human desire to spend time with some of the homeless people in his city because if he had wanted to do that, he wouldn't have shown up to take part a staged production involving multiple police bodyguards chauffeuring him and his wife to this photo opportunity with a photographer standing by to capture the moment..

It's isn't just that the photo is offensive, although the presense of the bodyguard standing watch says volumes how fearful the mayor is about interacting with the people in his city, but worse was his claim that this poor, homeless man appreciated the fact that the Mayor of Miami and his wife had singled him out for a little chat because they, "Couldn't think of a more beautiful gift than the gift of "our time.""

Only in the delusional mind of someone who has lost all proportional sense of reality could the Mayor of Miami believe that the most "beautiful gift" that some poor, homeless person living on the streets of his city would want to be grateful for was these two Gen X posers sharing their "time."

As Natalie Lopez, who responded to Suarez on Twitter commented, "Pretty sure he'd rather have a roof! Food! A hot shower! Clean clothes! Clean underwear!"

The poor and the homeless have always served as useful foils for the machinations of politicians and so-called do-gooders and as this photo op illustrates once again, when faced between the hard choices required to force an the Homeless Trust to do more with the tens of millions of tax dollars that they control, or engage in vapid and useless gestures, Suarez chose to exploit "David" for a photo op.

It's hard to understand just what motivates Francis Suarez to do and say these stupid things.

When it comes to the "quality of life" under Francis Suarez's personal roof, life there is demonstrably different than it is for almost all of Miami's others residents.

On Saturday afternoon I drove by Suarez's $1.45 million dollar house in the South Grove -  the house that he continues to refuse to explain where he got the $309,000 to cover the downpayment - to check out whether my previous trip there last week, made in response to claims by neighbors that he had multiple police cars and police officers guarding the house 24/7, was still going on.

I could not confirm that there were multiple police officers on the property, but one of his bodyguards - from originally having 2 personal bodyguards, it appears that the rumors that he now has 3 are true - got out of the Mayor's SUV when I parked on the street to get out and take the below photo. Behind the SUV is a regular police car that seems to have been parked there permanently. 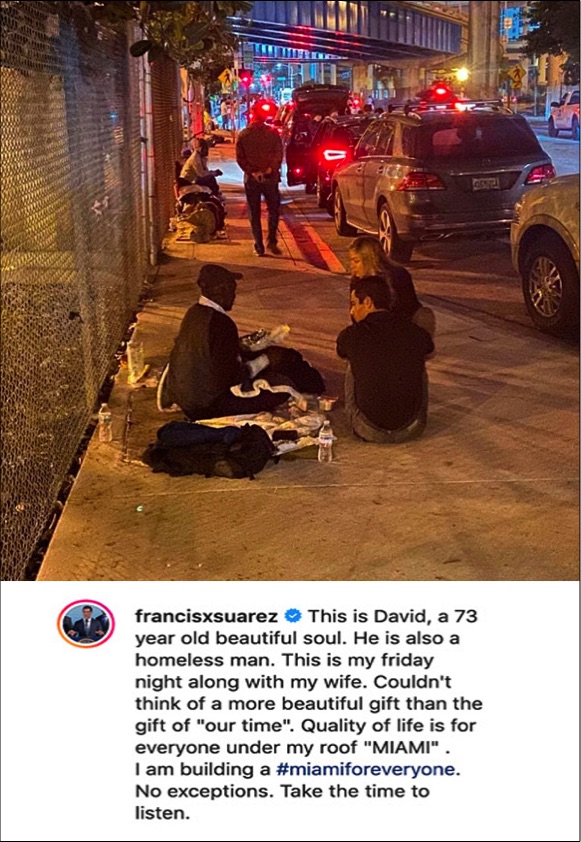 Suarez goes nowhere - even to the bathroom at City Hall during commission meetings - without police protection, raising a question of whether he is the subject of unrevealed threats, or whether he believes that surrounding himself with bodyguards somehow enhances his stature as a leader worthy of being protected because it's hard to fathom what official actions he's taken that could prompt threats.

Other than passing out Keys To The City to accused sexual abusers like Tony Robbins and other vacuous actions his power as mayor is almost exclusively ceremonial.

One thing he does do, and he does it often, is to take credit for actions that don't necessarily hold up under scrutiny.

On a morning talk show yesterday, Suarez, when asked about the low murder rate in the city - a claim that he and the Chief of Police like to brag about - he was quick to cite the installation a computer system called Shot Spotter as an important factor in reducing gun violence.

"As mayor, I know with precision when a shot is fired in my city," he claimed.

That may or may not be true, but approximately 20 minutes after I took the above photo in front of Suarez's house on Saturday, I took the following photos in Little Haiti, where police had responded to multiple gunshost fired in a drive-by on 56th Street, just east of NE 2nd Avenue.

Just because he knows when shots are fired in his city, doesn't mean that he'll show up anytime after the fact because while the number of murders in the city might have might have dropped, the number of people driving around looking for someone to shoot hasn't, and Miami still remains a dangerous place day or night.

In talking to folks who live in the area and who were watching the police wandering around in the photo above, they told me that this was not the first drive-by on this street, and in their opinion the real reason that there were less murders was not because of any thing done by the police, or because of any computer programs like Shot Spotter, but because the drive-by shooters were lousy shots.

In fact, whether you live or die after being shot in Miami isn't tied to some magical activity on the part of Miami's police as much as it is to the inability of the gangbangers and others to shoot straight, and to the fact that we have one of the best trama centers in the country who specialize in treating gunshots.

In any number of ways when it comes to the "quality of life" in places like this street, the mayor's concerns are more focused on promoting Special Area Plans, and furthering the ability of his developer pals and campaign donors to displace the poor people living there.

We know this because the only time that Francis Suarez shows his white privileged ass in Little Haiti, Liberty City, Overtown or any of the other parts of Miami that are poor, under seige and underserved by his administration is when he rolls up in his shiny SUV, with bodyguards and someone ready with a cellphone camera to take his photo at some carefully staged event.

About the only "real" thing that Francis Suarez has managed to accomplish during these first two years of what is looking more and more like a one term spin as mayor is that he has become a whiny, cowardly, self-entitled and self-centered poser who is so lacking in moral courage that he's had to resort to begging for respect from the likes of Commissioner Joe "Comemierda" Carollo, as vindictive, corrupt and miserable a human being to be found in Miami who regularly treats Suarez worse that he treated his battered ex-wife.

Like so many other disappointment in life, I guess that the once, much vaunted fact checking operation of a magazine like TIME has gone in the toilet, because I cannot believe that back when TIME was really TIME, they would have anointed on the pages of their magazine some spineless and whiny political hack as a leader of the future.

This folks, is now what passes for moral leadership in the city of it's Miami, Bitches!