In the Cuban exile community, as in any number of other communities, giving someone the finger is a time honored tradition.

In the photo above, Cuban exiles standing outside of the old Miami Arena spent most of a Saturday night in 1999 giving the finger to all the people - including a lot of Cubans - who went to the Los Van Van concert.

If I had a dollar for every Cuban in Miami who has given someone the finger - especially politicians - I'd be rich enough to move back inside Miami and and finance a run for Mayor in 2021.

Commissioner "Comemeirda" Carollo, whose been de la Pinga's biggest supporter, as well as his UBER driver, even went so far at the June 13th commission meeting, (6:08 PM,) to whine that I had given him "the index finger," during the commission meeting, which prompted Colonel Klink to weigh in by claiming he had seen me doing it too. The Klinker is such as suck-ass.

ALEX DE LA PINGA DECIDED HE DOESN'T HAVE ENOUGH ON HIS PLATE SO HE WANTS TO COME OUT AND PLAY WITH ME. I'M ALWAYS HAPPY TO ACCOMODATE, ESPECIALLY SINCE HE'S JUST ANOTHER MORON WHO THINKS HE'S GOT GAME BECAUSE HE TALKS SHIT TO OLD WOMEN

The caption that Alex de la Pinga wrote to describe this photo claims that, "This gesture is to a young lady who volunteers for us. Pure garbage."

It's hilarious that a sleazy, unprincipled and sanctimonious phony like Alex de la Pinga would decide that now was a good time to want to play with me, and then choose to be so stupid as to post a comment on a photo that I could so easily provide a counter story for and thereby tell him to stick it up his ass, and rotate on it.

Even funnier is that he chose to do this, and then posted it on a campaign Twitter account that has all of 20 followers. 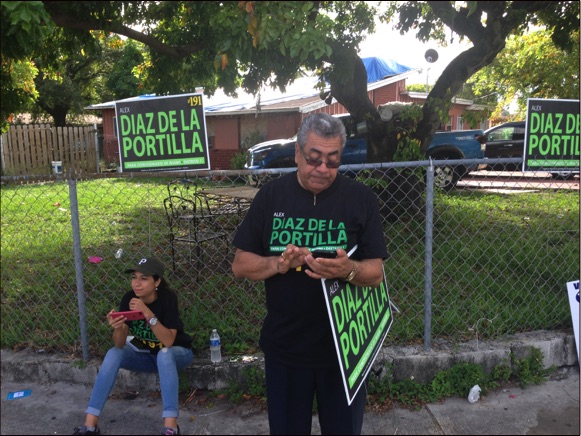 Here's the video, and you'll see and hear that me and Manolo - that the name that de la Pinga's campaign worker gave when I asked him - and we had a friendly little chit chat.

So, here's where we stand this Sunday morning.

Alez Diaz del la Pinga is still having his campaign workers enter Building B at the Three Towers after repeatedly being told he doesn't have permission to do so - I'll have a separate story on that soon -and he was photographed and videotaped with a campaign worker passing out campaign cards to people in line for the monthly Farm Share event next door to the polling place in Allapattah, which is supposedly prohibited by the Farm Share people, and I'll be doing a bigger story about all of this too.

Not only did "Comemierda" claim I was giving him the "index finger," but he also claimed that I was saying things to him.

Obviously not only does this moron not know what finger constitutes giving someone the finger, but from his own paranoid admission, it seems that I've managed to have moved into his head and settled in if he hears me saying things to him during commission meetings.

On Saturday afternoon however, across the street from the Allapattah library which is serving as the voting precinct for the early voting in District One, I did indeed give the finger to one of Alex de la Pinga's campaign workers.

It started when a gentleman came up behind me when I was talking with candidate Miguel Gabala, and pointed his cellphone at me in what I suspected might be an effort to record our conversation.

When I noticed him doing it, I walked over and spoke clearly into his phone identifying myself. The guy said nothing, and walked back across the street.

A few minutes later I stood out in the street to take a couple photos of a van driven by a member of the Miami Fire Department ferrying voters to the library, and as I did, I heard this guy sound off.

I turned around, and he was either shooting video or photos of me, and so I walked over in front of him, and after telling him that if he wanted to good photo I'd give him one, I gave a finger to the camera.

You see, below is both a photo and a video that I TOOK that shows the guy standing right in front of me, and while the angle of the photo above indicates that it was taken by the woman sitting on the curb that is visible in both the photo and the video, I wasn't giving her the finger, I was giving the finger to the guy holding the cell phone camera.

That doesn't mean that if she had been the one standing in front me me with a cell phone camera I wouldn't have given her the finger, because I would, but in this case I didn't.

I say that because among Alex de la Pinga volunteers he has some women who are now known as the WhatsApp Gang, for their behavior in destroying ballots when de la Pinga ran for County Commission last year.

In spite of, and in some cases because of all the sleazy and questionable things that he and his campaign are doing there is a possibility that the next District I Commissioner could indeed be Alex Diaz "de la Pinga" Portilla.

Elections have results, and the screwing that people get is proportionate to the either the level, or lack of participation that they invest in choosing who they want to represent them. In short, when it comes to elections, people get the screwing they deserve for electing the assholes that they elect.

That's the brutal reality of what is happening today and every day until the election on November 5th.

So, if the people in District I choose, or get bamboozled into electing de la Pinga into office, then you can expect that putting him together with   Commissioner Joe "Comemierda" Carollo, will, in a very short period of time result in them turning an already crazy city commission into the "De La Pinga, Comemierda" Show.

And if that happens, then buckle up bitches, because worlds alone won't be adequate to describe what happens in the City of Miami.