WHILE FRANK PICHEL MIGHT BE BATSHIT CRAZY, HE WAS SMARTER THAN ALL THE OTHER CANDIDATES IN TAKING ADVANTAGE OF FARM SHARE TO PROMOTE HIS CANDIDACY ON SATURDAY MORNING, MEANWHILE FEET AWAY, ELEZAR MELENDEZ TWIDDLED HIS THUMBS AND DIAZ DE LA PORTILLA WAS IN FRONT OF THE POLLING PLACE GREETING THE OLD FOLKS WHO HAD BEEN BUSED IN TO VOTE FOR HIM

The last Saturday of the month is when Farm Share holds it's monthly event in Allapattah. The event provides much needed food to hundreds of families, and for that reason politicians have over the years seized on that event, and others in the city as an opportunity to link themselves with the giveaway of food.

This in turn has long prompted complaints which ended up before the Miami-Dade Ethics Commission, and in 2015 the commission recommended that Farm Share should separate itself from the City of Sweetwater because of the way the politicans had attached themselves to the program. 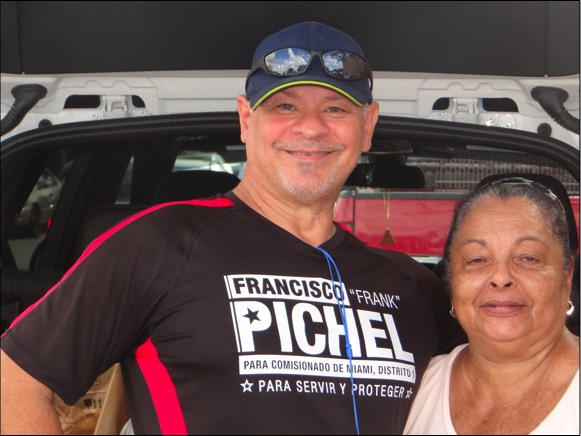 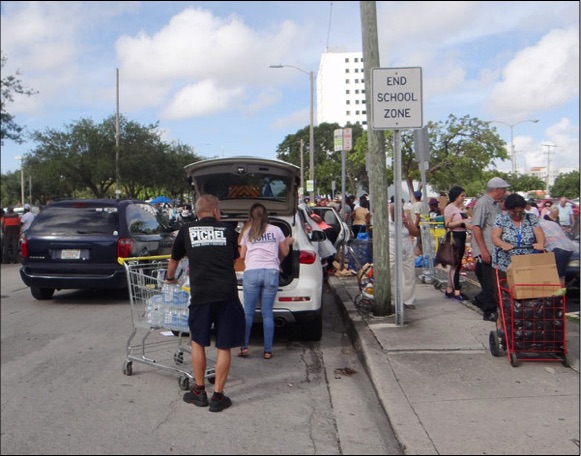 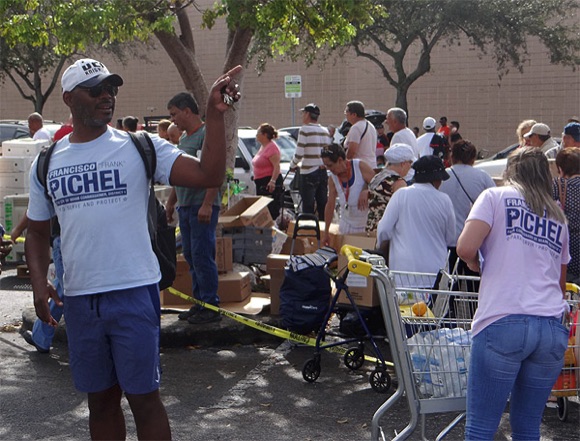 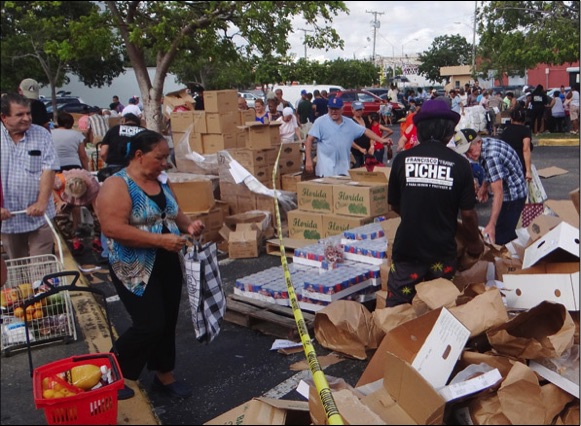 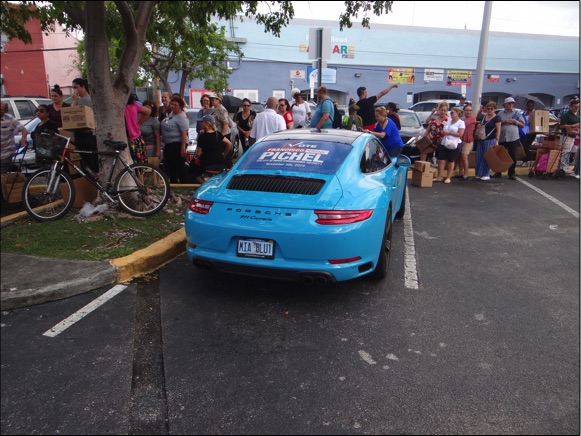 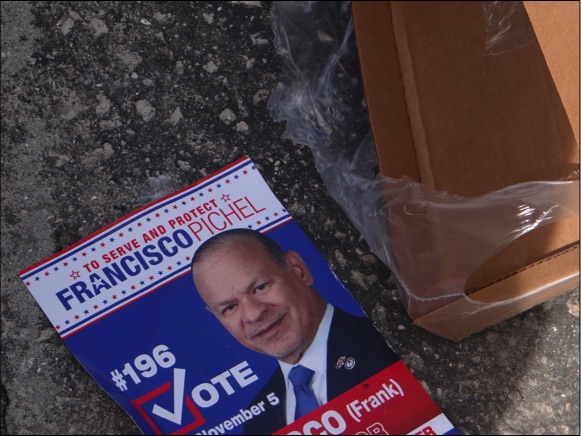 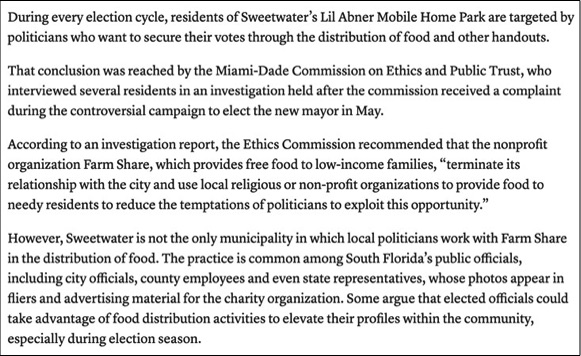 As part of my last story about Alex Diaz de la Portilla, he and one of his volunteers were photographed and videotaped trolling the people lined up for food and passing out campaign cards and they were asked to leave.

Candidate Frank Pichel on the other had seemed to have no problem having workers wearing his campaign tee-shirts all over the event helping folks and directing traffic.

Pichel was also slick enough to have parked his car inside the roped off event space before it started, with a nice big campaign sign in the back window.

And of course, Pichel's campaign cards did manage to get passed out, and thrown away next to an empty box that had contained food.

Other candidates who expressed unhappiness with the discovery of all of the above were invited to have some of their own campaign workers to help pass out food, but none of them, with the exception of Miguel Gabala, whose wife and a campaign worker were available, took advantage of the invitation. 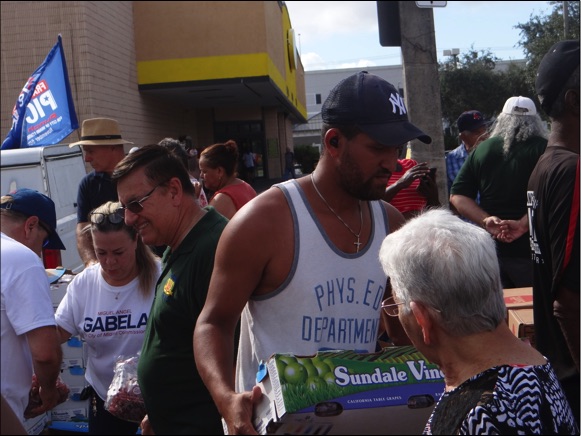 So, score one for Frank Pichel. who I was told had early on become a member of Pastor Garcia's flock, and therefore had the opportunity to figure all this out before the event.

Pichel might be batshit crazy, but he isn't stupid. which is more than can be said for Eleazar "Doe-Eyed Millennial" Melendez.

While Diaz de la Portilla was walking the line, and Pichel's campaign workers were helping to pass out food, Melendez sat across the street under a pop-up tent, waiting for potential voters to come across the street to talk with him like some salesman with a deal on hurricane windows. 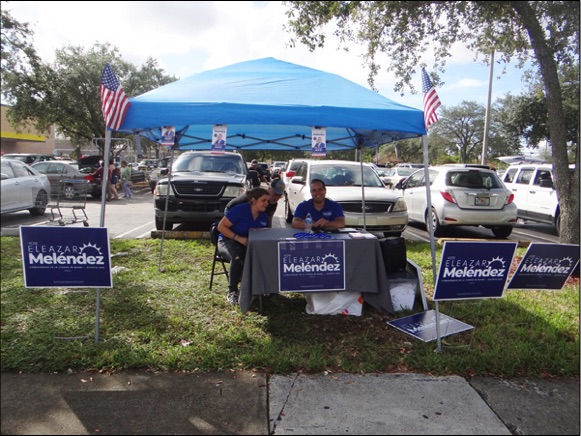 This is the guy that Commissioner "Sellout" Russell gave $150,000 to, and with his little pop-up tent, and his table top full of campaign trinkets, seems to be both clueless and totally unaware that by the time he was chased away from walking the food line, Diaz de la Portilla had already arranged for multiple vans and even a Shuttle Bus to ferry old people to vote 200 feet away, and just to make sure that they didn't forget who they were there to vote for, de la Portilla made it a point to meet some of them as they got off the bus. 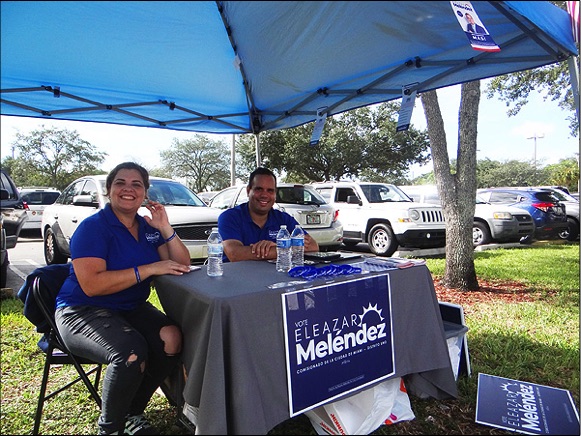 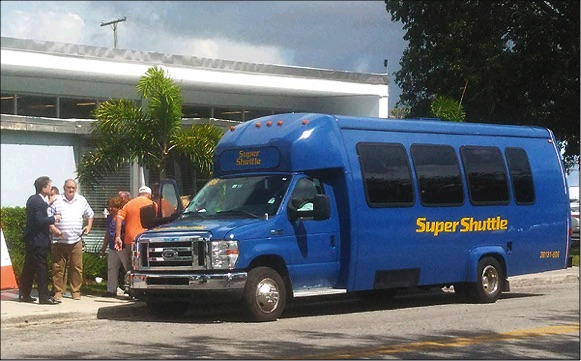 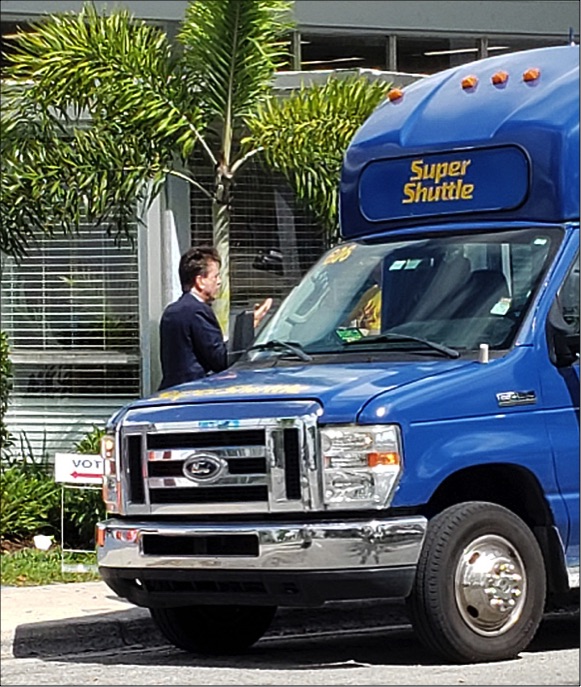 Whether anyone can prove that de la Portilla is violating the law in the photos above - he can always argue that he's not soliciting votes 40 feet from the front door of a polling location but just making sure everyone had a nice bus rise - the fact of the matter is that de la Portilla has a long history os skating along the edge of the cliff while giving everyone the finger, because the one thing that he's learned, as has every other Cuban politician who runs for office in Miami-dade County is that State Attorney Katherine Fernandez-Rundle doesn't believe in prosecuting campaign law violations against them, given the shady shit she herself has done in the past when running for reelection.

Of course getting a Free Pass from Fernandez-Rundle doesn't apply to non-Cubans because as the record reveals she prosecuted Michael Grieco for the same kind of dark money shit she engaged in when her Puerto Rican boyfriend was getting his friends and business associates on the island to "donate" $115,250 to her campaign back in the day.

No matter where you turn in Miami, politics is dirty, protected by moonlighting cops acting as personal bodyguards for some of these candidates in the hopes of parlaying that activity into a job at City Hall as a Sgt-at-Arms, and members of the fire union driving old folks to the polls and then going in to help them fill out their ballots. 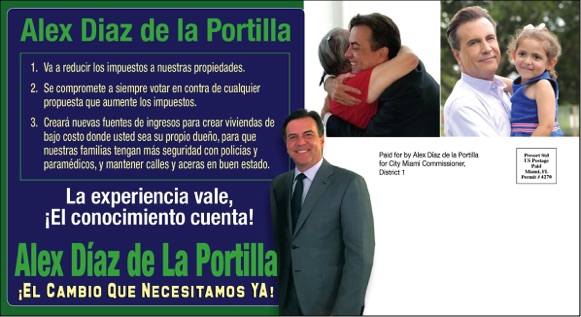 POLITICAL MAILER OF THE DAY - ALEX DIAZ DE LA PORTILLA WANTS YOU TO THINK OF HIM AS A FAMILY MAN. THE ONLY PROBLEM IS HE DOESN'T HAVE A FAMILY AND THOSE AREN'T HIS KIDS

I'm not sure that that's a distinction with a difference, because in the minds of many people, seeing people wearing Pichel tee shirts passing out food and helping them to take the food to their cars isn't something that would prompt critical thought in the minds of those associating the food giveaway and Pichel's campaign.

Here are some photos from that event. 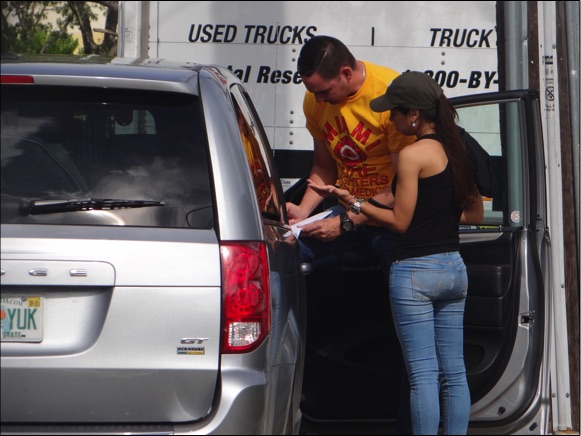 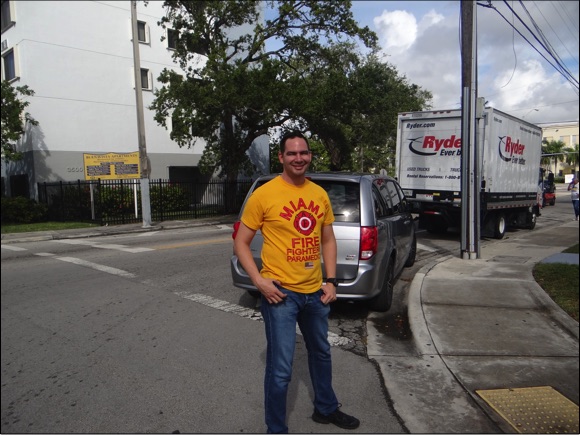 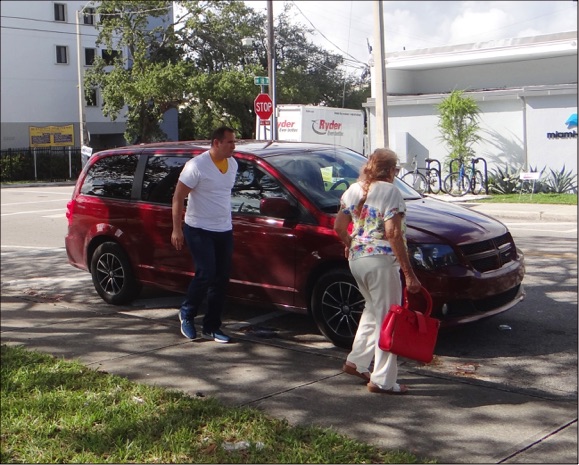 The thing that seems to piss people off the most is the way that the firefighters openly wear tee-shirts that identify them as firemen, but when escorting old people into the polling place, they go through the charade of putting a plain white tee-shirt over their yellow tee-shirts, as if that somehow disguises who they are.

I spoke with one employee of the board of elections who told me there was nothing illegal in a fireman coming in and filing out the ballot for an old person, as long as they signed the affidavit that states that the old person needed help, and Freddy Delgado, the president of the fire union told me that they only bring people to the polls who have called up asking for help.

Contrary to rumors circulating on Monday morning, no complaint has been filed challenging any of these activities, and lost in all of this is the real issue that seems to be beyond the ability of the average voter to comprehend: What is the real Quid Pro Quo that both the police and fire unions expect from these political candidates if they get elected?

Clearly both the City of Miami police and fire union believe that Alex Diaz de la Portilla will reward their support of his candidacy with more than a Thank You note.

Unless, and until those issues get aired in public, all of these campaign violations are little more than acts of mopery intended as acts of distraction while the bank vault is being emptied around the corner, and out of sight.

I have spoken with the folks at Farm Share who informed me that while they provided the food for the Saturday event, the sponsors and folks in control were the New Hope Ministeries, and that they do not allow what happened at the Saturday event as it relates to Frank Pichel's workers wearing campaign shirts while passing out food to take place at their events.

In addition, I learned after I posted my story that Pastor Jose Garcia replaced Frank Pichel on the Code Compliance Board as a result of Pichel's recommendation. This changes the relationship between Garcia and Pichel, and makes what happened on Saturday a conscious political event that was stacked in Pichel's favor.

I don't speak with Jesus, but I suspect he might not look favorably on this behavior.