It's Miami, Bitches!, and you can't make this shit up.

Alex Diaz de la Portilla has made a career of claiming to be a loyal and true Republican, except of course when he's teamed up with his pal Sasha Tirador - aka, The Hialeah Absentee Ballot Queen - whose known as a go-to political operative who practices the dark arts.

In 2018, Diaz de la Portilla received a total of $130,511.19 in payments from Tirador's company G & R Strategies, which was detailed in a spreadsheet of Diaz de la Portilla's company, First Stone Management, Inc. that the Crespogram received over the transom with information that this money allegedly represented his share of the money that G & R Strategies received from an unidentified 501-C-4 PAC, that was the cut-out used to fund negative campaign activity for the Andrew Gillum campaign for Governor in 2018.

In addition, it appears that Diaz de la Portilla received a total of $145,000 from International Atlantic, LLC, which Florida records show was a Florida Limited Liability Company controlled by Nader Ghermezian, one of the members of the Ghermezian family who are behind the Great American Mall that they want to build in Northwest Miami-Dade County.

You got to wonder why, of all the potential bagmen, lobbyists, and fixers in town that Alex Diax de la Portilla would be the one to receive $145,000 from this company, given that he's not registered either in Miami-Dade County or Tallahassee as a lobbyist for this company.

Maybe those eagle-eyed stenographers at the Miami Herald might want to follow up and go and ask County Commissioner "Pepe" Diaz what happened after he spoke out against the the Ghermezians went to Tallahassee in an effort to get state money after promising that they wouldn't?

In any event for a guy who claims that he is constantly broke and who has had problems paying his property taxes and employees on his campaigns, he certainly managed to make a lot of money in 2018.

nMaybe Alex Diaz de la Portilla might release his tax returns to show how much money he actually made, or better yet claimed he made in 2018?

Enquiring minds always want to know in It's Miami, Bitches! 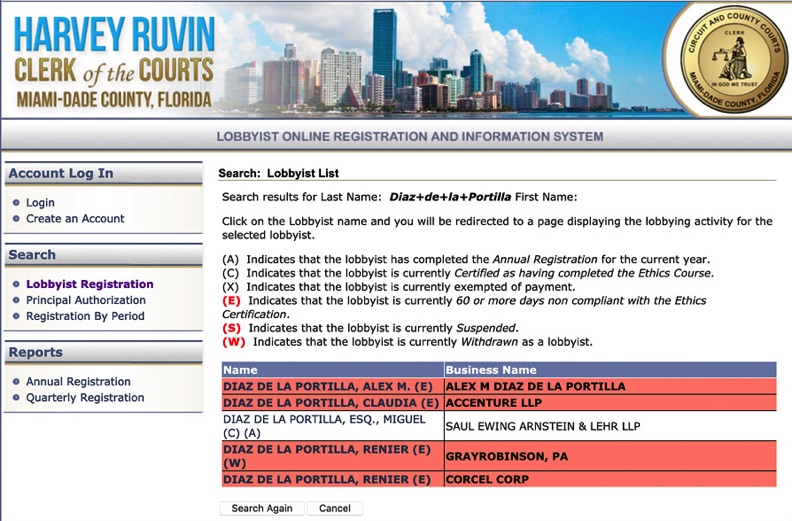