IT'S TIME TO STICK A FORK IN ELEAZAR MELENDEZ, THE CARPETBAGGING, DOE-EYED MILLENNIAL WHO DEMONSTRATED AS THE THE CHIEF OF STAFF FOR COMMISSIONER "SELLOUT" RUSSELL THAT HE WAS BOTH INCOMPETENT AND A SNAKE

He joined the staff of newly elected city commissioner Ken Russell after he was fired by the South Florida Business Journal when it was discovered that while working as a reporter, he was also moonlighting as a media advisor for Russell.

In short order he went from being the PR guy to being Russell's Chief of Staff, and some believe his Rasputin, leading Russell down a path that in some ways he has never recovered from, including the disastrous effort to fire City Attorney Victoria Mendez., which as was revealed at last night's commission meeting was something that should have been done years ago.

While portraying himself as a "doe-eyed millennial," Melendez demonstrated a repeated willingness to use sharp elbows and an abrasive attitude that eventually led to the remainder of Russell's staff demanding that he be fired.

Melendez moved on to a cushy job with the Florida Democratic Party that lasted only months before he mysteriously quit - somebody ought to do a little digging to find out what happened that prompted his leaving - and then he bounced around working on several campaigns including Bill Nelson's campaign for U.S. Senate.

And now, here he is running for the Miami City Commission, as a carpetbagger promoting himself as the voice of a new, progressive generation.

In truth, he is, without putting too fine a point on it, a fucking idiot, lacking in real political skills as evidenced by the above email that he claims was sent to, "20,000 people."

The email declares that he needs 500 people to donate $100 each so that he can maintain a TV presence for the remainder of the campaign.

A search of his campaign donations to date show that in 8 months of fund raising he's only managed to get 248 people to donate a total of $73,500, or which $15,000 was a loan he made to himself, and in the last campaign report that followed this solicitation, he only managed to raise $2,065, a far cry from the $50,000 he claimed he needed.

He hasn't fared much better in his personal efforts to contact voters in the district.  In fact, his approach has been so aggressive and unwanted, that I had one voter in the District send me what is known as a Door Kocker, with a message saying:

"This character does not let us live in peace. There are

already 5 visits. We are tired." 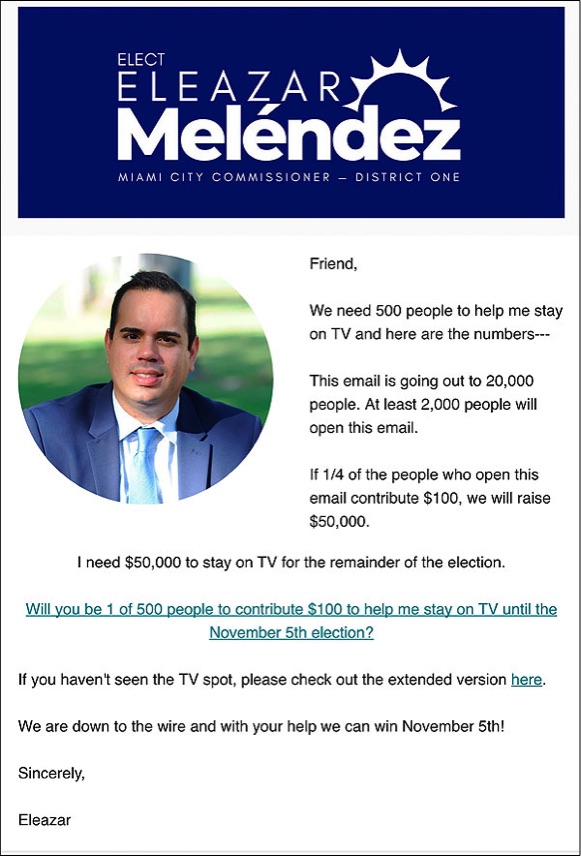 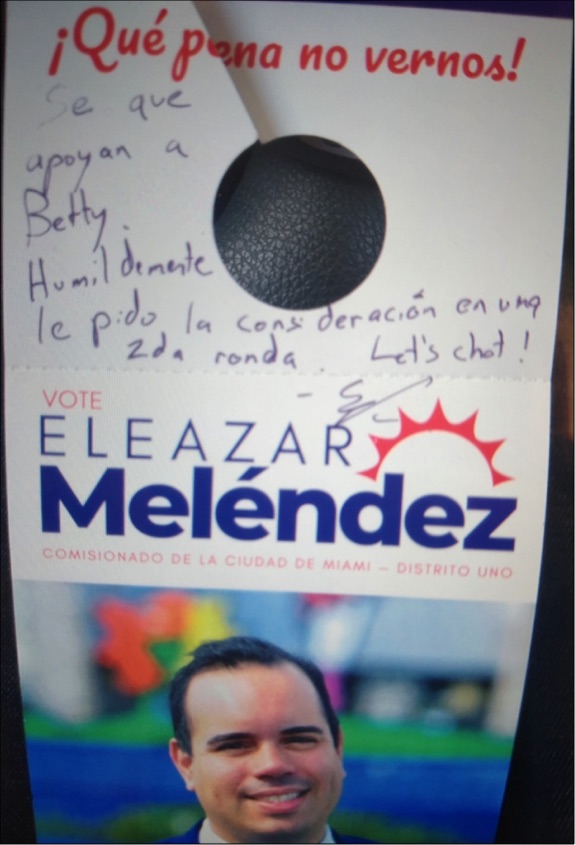 District 1 faces a number of problems, as does the city, and the possibility of Alex Diaz del la Portilla getting elected and sitting on the dais with Joe Carollo is truly a frightening thing to contemplate.

At this point Eleazar Melendez has zero chance of getting elected, and any claims about this being a race between him and Diaz de la Portilla is nothing with wishful thinking on his part.

If he really cares about the residents of the district and the problems facing the city, the right and honorable thing for him to do would be to announce that he is suspending his campaign and will be supporting one of the other two candidates with a possible chance of beating Diaz de la Portilla: Horacio Aquirre and Miguel Angel Gabela.

If he won't do that, then at the very least Ken Russell should quit calling people up and trying to get them to give Melendez money, and he should remember why he forced Melendez to leave his office.