In January of 2015, I filed an ethics complaint against Alberto Carvalho, the Superintendent of The Miami-Dade County School System after I had written a three part series describing how local politicians, including Katherine "Queen Of Swag" Fernandez-Rundle, Miami-Dade County Mayor Carlos Gimenez, City of Miami Mayor Tomas Regalado, his daughter and School Board member Raquel Regalado, former Miami City Commissioner Marc Sarnoff and Carvalho had received thousands and thousands of dollars in free tickets and gifts.

I filed my complaint against Carvalho ONLY after I had made 3 separate public records requests seeking documentation from his office as to whether he had ever filed a Form 9 Gift Report and was first ignored, and then given a run around by Carvalho's staff.

In my original complaint, I listed 5 instances where I believed Carvalho had accepted tickets to Black Tie galas and other events including a cruise, along with accompanying tickets for his wife and failed to report them. The published face value for these tickets was close to 0,000.

In addition to tickets I also alleged that he had taken and failed to report expensive ties as birthday gifts from the Chairman of the School Board. In support of that allegation I included portions from a flattering profile story that appeared in the Miami Herald's upscale INDULGE magazine.

The subsequent investigation took almost 18 months, and the final investigative report expanded my original 5 possible violations BY ADDING 6 MORE POSSIBLE VIOLATIONS to make a total of 11 separate instances where the Commission On Ethics investigator believed that Carvalho had failed to comply with the requirements to report accepting free tickets and the ties.

On September 9th, the Florida Commission on Ethics (COE) met in Executive Session and concluded, but not without first hearing ample amounts of self-serving platitudes about Carvalho was honoring his father by appearing at the hearing, how he respected the Commission and the job they do, claiming that the Superintendent's job is a 24/7 commitment where attending events is something he considered to be part of his official duties, as well as having his attorney boast of what a fine job Carvalho has  done in raising the performance of students in Miami-Dade County schools and all the awards he received as a result of these accomplishments, made by his attorney Roberto "Bob" Martinez, of the law firm Colson Hicks Eidson.

The Commission's conclusion after an hour and seven minute hearing was  that there was Probable Cause that Carvalho had violated Florida law by failing to file the acceptance of tickets and ties detailed in 8 of the 11 counts of the complaint.

Two of the three counts where there was No Probable Cause involved Carvalho taking tickets from a vendor doing business with the school system, which is a different, and far more serious kind of violation, but which the Commission seemed both confused and uninterested in referring to any other agency for review. The third instance involved tickets accepted by his wife, who was a board member of the host group.

Now, failing to report the acceptance of tickets, meals and other items considered "gifts" does not in and of themselves rise to the level of high crimes and misdemeanors, but it was the Florida Legislature who made the decision that requires elected and senior public officials in decision making positions to report any gift they receive where the value is more than 00 because it's one of the only ways that either the press or citizens can take advantage of in an effort to keep track of what gifts public officials receive, and far more importantly, who gives them these gifts.

The question of who gives gifts to public officials is especially important because public officials in Florida have gained a well earned and unsavory reputation of being willing to sell out their public trust and the taxpayers for chump change money and trinkets in turn have a direct relationship to votes made, or contracts awarded.

Carvalho's acknowledgment that he knew about the provisions of the law requiring the reporting of gifts as well as his defense as to why he didn't report any of these "gifts" were included as part of the investigator's report. 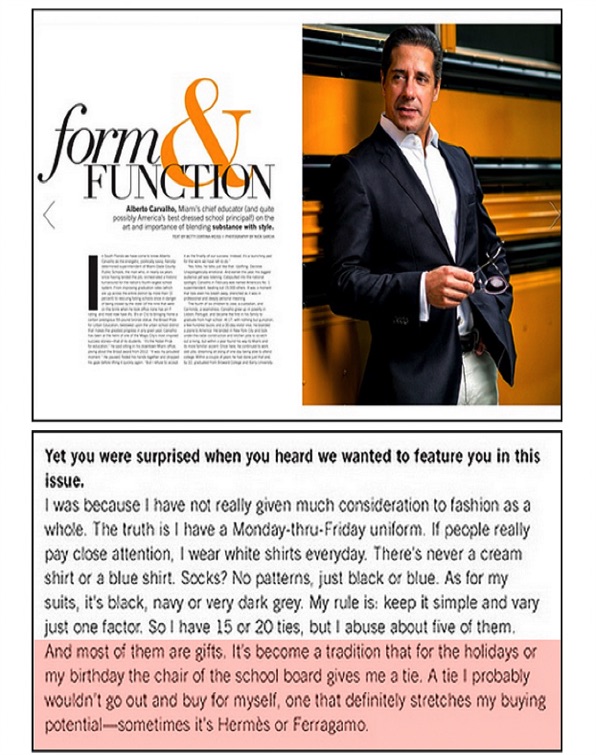 I have no way of knowing whether the latest guest list is an accurate list, and at this point any list I'm provided would be suspect, but all of this did prompt me to consider whether there were any other relationships between Carvalho, the  Arsht Center and any of the individuals whose names appeared on these lists beyond the "Cultural Passport" program between the School system and the Arsht Center that would have led if not to the invitations, to the seat placement.

One need not wear a tinfoil hat or embrace the craziness of people like Donald Trump to speculate on the relationships and subtle efforts to influence decisions through invitations to fancy Black Tie galas, or to wonder about the degrees of separation between a law firm inviting the School Superintendant and his wife to join them at a gala, and then have one of the lawyers from that law firm show up to defend the Superintendent when it's revealed that he failed to obey the law in revealing the acceptance of that invitation.

But while the Florida Ethics Commission found Probable Cause that Carvalho have violated the law, they were quick to move on to the next case without so much as a mention of what would come next, like either a trial, or carvalho's agreeing to accept the Probable Cause finding and pay a fine.

He just walked out the door escorted by his attorney from the firm of Colson Hicks Eidson, as if nothing had happened.

Even in Tallahassee, It's Miami, Bitches rules apply!

While I had no reason to believe that anything untoward or illegal - other the the failure to report  the tickets - was involved in Martinez's representation of Carvalho, or his law firm's invitation to the Carvalhos to join them at their table, I decided just out of curiosity to ask for a copy of the list of all the individuals who had sat at the tables with the Carvalhos in 2012, 2013 and 2014 that were mentioned in the report.

I might as well have asked for Hilary Clinton's missing emails.

Last week in a series of emails that started with my request, followed several days later receiving a list of 50 people that supposedly had been part of the Colson Hicks and Eilson table in 2012, resulted by last Friday in receiving an additional 2 lists from the Vice president of Legal Affairs for the Arsht Center that have left me wondering whether all of the public money that the Arsht Center continues to receive from the OMNI CRA is worth it if these high-priced functionares can't keep adequate records of who attends a once a year gala,

Nor can I ignore a conspiratorial thought or two as to why it took three tries to come up with the right sponsors, the right years and the right table mates, and whether the last list is actually accurate?

It's a two-sided game, this game of cultivation, and for public officials, the efforts to cultivate them on occasion leads to blandishments, bribes and other favors that result in the taxpayers being sold down the river.

One of the first things that got my attention as I went over the various documents I received after the announcement of a Probable Cause finding by the Commission was the fact that Carvalho's attorney in this matter was Roberto "Bob" Martinez, a well known and respected high-powered attorney with the firm of Colson Hicks Eilson in Coral Gables.

The reason this got my attention was that his law firm was citied in the investigator's report as having given Carvalho and his wife tickets to the 2012 Arsht Center Gala, and now here he was representing him against the charge that he had failed tob report the acceptance of those tickets.

Throughout the investigative report Carvalho made repeated defenses of why he believed that he did not need to report the tickets he received because some of the events he attended he was required to work and further the goals and objectives of the organization that invited him.

An example of that was the United Way cruise that he and his wife attended that was a fundraiser, and how, as the report revealed, he had been instructed by Harve Mogul, the President of United Way of Miami-Dade County.