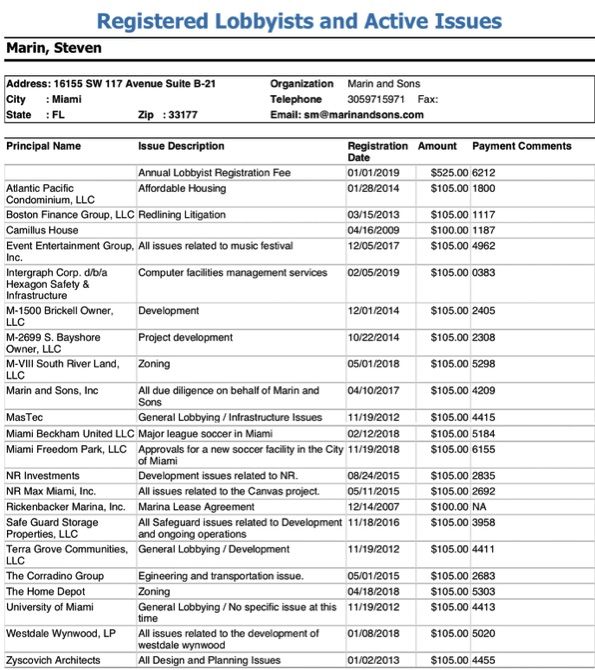 IN 1998, STEVE MARIN, THEN AN UP AND COMING POLITICAL OPERATIVE WAS ACCUSED OF DELIVERING AN ENVELOPE FULL OF CASH TO ONE OF XAVIER SUAREZ'S CAMPAIGN WORKERS DURING HIS RACE FOR MAYOR. MARIN'S RESPONSE WAS, "I WOULDN'T DO THAT, I DON'T DEAL IN CASH." THE YEARS SINCE HAVE BEEN EXCEEDINGLY GOOD FOR MARIN, WHO CONTINUES TO HAVE FRIENDS IN CITY HALL, AND WHO KEEPS DOING WHAT HE DOES, EVEN IF HE DOESN'T DO IT WITH ENVELOPES FULL OF CASH

Steve Marin has largely avoided being written about critically by what passes for the local news media since the above 2005 story, and never since then have any of those stories referenced the allegation involving the envelope full of cash, or the implications that come along with an accusation that an envelope full of cash was part of a candidate's campaign financing.

In fact, since I've been writing this blog I think that I have written more stories that have included a mention of Steve Marin than all of the other news media in South Florida combined, and I've yet to see him one time inside City Hall, because one of the other things that he does well is keep a very low profile.

A low profile doesn't mean that Marin hasn't been busy.

He was very busy during the years that Marc Sarnoff and Francis Suarez were city commissioners, raking in campaign dollars and representing clients who depended on the magic of Sarnoff and Suarez to get their projects approved.

Of all the things he did or didn't do, was stray far from the Suarez family.

In 2018, when Suarez tried to get the voters to support his effort to become Strong Mayor, Suarez's PAC's paid Marin & Son a total of $319,550.00, for various services rendered.

2018 was also the year that the annual US Conference of Mayors was held in Boston, and spotted lurking among the potted plants in the hotel lobby was none other than Steve Marin, because what self-respecting Miami Mayor doesn't show up at major functions without his personal campaign consultant in tow.

In all, one way or another Steve Marin has been involved in, or with the campaigns of most of the current office holders in the City of Miami.

Campaign money was just one of the two revenue streams that Marin tapped into by being an all-around inside player at Miami City Hall, because having helped all of these upstanding public officials to get elected, he then was in a position to exploit those relationships as a lobbyist for those who needed a favorable vote from these guys as evidenced by his list of lobbying clients.

A few months ago - how time flies when the scammers and schemers keep filing through the lobby of City Hall - when the decision was being made to get the ULTRA Music Festival back to Bayfront Park, Joey Flechas, the Herald's part-time City Hall scribe wrote a story about the various backroom players and money that was changing hands as the ULTRA folks engaged in a pretty naked effort to buy influence with the members of the city commission.

The money spent by ULTRA is chump change compared to the money already spent by Mas and his partners to this point, and more money can  be expected to be spent in the next few weeks on the campaigns for both District 1 and 4 - a challegner is rumored to announce today or tomorrow against Manolo Reyes - in the next 6 weeks, as the Melreese Golf Course/Beckham Soccer Stadium deal comes to a head with a vote on whether to award a lease to Jorge Mas.

It remains to be seen whether Manolo Reyes, Willie Gort and Commissioner "Comemierda" succeed in killing this deal, but if they don't you can bet that the guy who pulled the strings behind the curtain to get the deal done was Steve Marin.

Long gone are the days when envelopes filled with hundred dollar bills was the way to buy vote in Miami, and while Marin may, or may not have given an envelope with $3000 to retired detective Charles Wellons that night on NW 17th Avenue, you have to remember that his biggest pal on the Miami City Commission for 8 years was Marc "Pay For Play" Sarnoff.

As a result of what has been alleged was a backroom deal between Suarez, Sarnoff and Ken Russell to stop Sarnoff from running against Russell this year for his old commission seat, Sarnoff is now the guy in the catbird seat delegated to  "negotiating" the lease contract with Jorge Mas on behalf of the city.

Say what you want, and I have, but Marin's clients always got value for the money they paid him to be their lobbyist, and the guy who most often made sure of that during his years in office was Marc Sarnoff.