WHEN WE LAST LEFT ADELE VALENCIA, SHE WAS WEARING KNEE PADS AND HAD HER NOSE STUCK UP JOE CAROLLO'S ASS.  THAT HASN'T CHANGED, BUT, AFTER SHE REVEALED HERSELF AS JUST ANOTHER MORON WITH A LAW DEGREE WHO COULD BE EASILY PLAYED, SHE WAS TAKEN FOR A REAL PONY RIDE BY AFSCME UNION PRESIDENT SEAN MOY 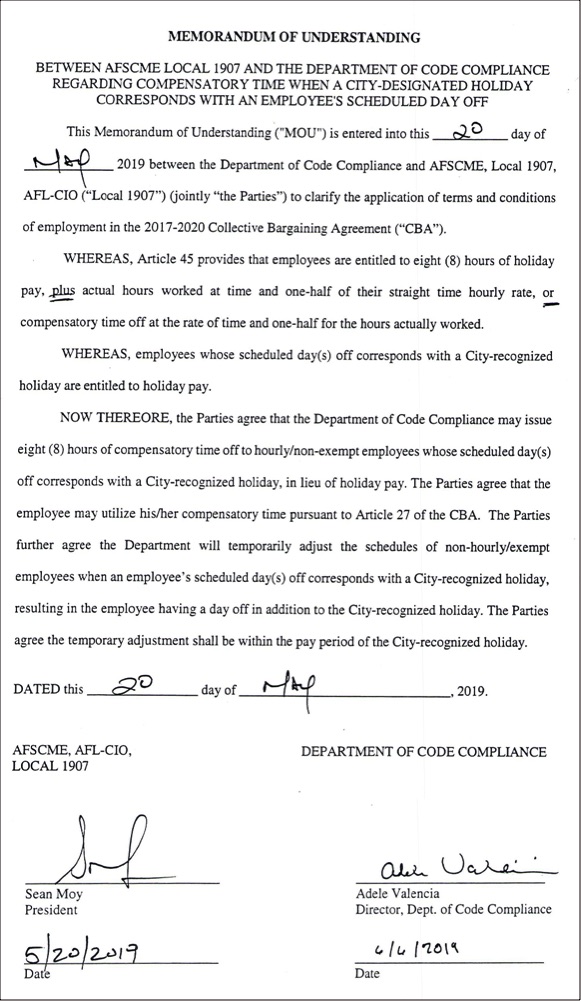 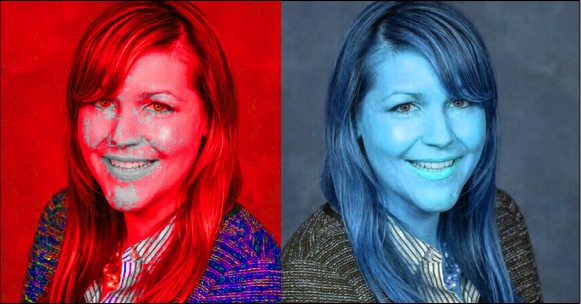 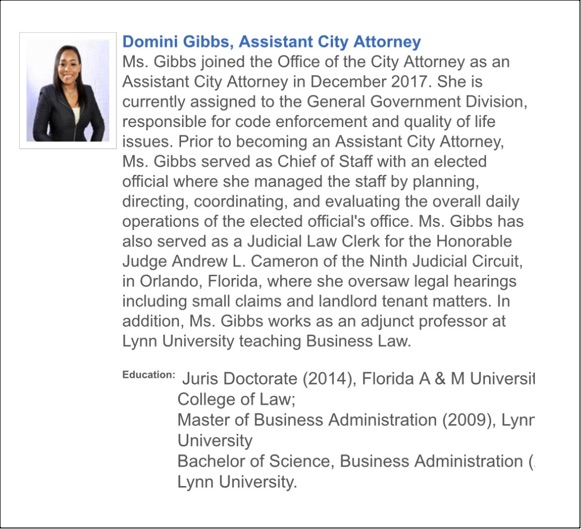 WHY WOULD ASSISTANT CITY ATTORNEY DOMINI GIBBS BE ASHAMED OF IDENTIFYING THE ELECTED OFFICIAL SHE WORKED FOR? MAYBE BECAUSE IT WAS FRANK CAROLLO

Domini Gibbs is the Assistant City Attorney in charge of overseeing the activities of Code Enforcement and quality of life issues, which in the city of Miami can sometimes be seen as an oxymoron.

In any event. Ms. Gibbs used to be Frank Carollo's Chief of Staff, a fact that she goes out of her way to make opaque.

There are two major problems exposed by this incident.

The first is the revelation that Adele Valencia signed off on a Memorandum Of Understanding on behalf of the city without having any knowledge of the facts, or of making any effort to educate herself before signing the document.

What's troubling about this is not just her failure to reach out for legal guidance before signing this document, but her willingness to commit the city to a course of action which even a low level city employee would have known was a decision and responsibility above her pay grade.

Common sense - if she had any - would have guided her to check with the City Manager, and/or the City Attorney's office - in this case the above mentioned Domini Gibbs - that oversees Code Enforcement before signing any document, especially a document being offered by Sean Moy, whose history should have been be enough to set off alarm bells, and whose behavior was described as, "surreptitiously circumvent(ing) normal channels," to get her to sign on the dotted line.

In any organization run by competent professionals, this behavior by Valencia would have been enough to escort her to the door and send her on her way.

But, not in Miami.

The second and far more disturbing problem revealed in Kevin Jones' email was his claim that:

"We are not sure how the union's proposed MOU

found its way to the payroll department for

processing without the manager's knowledge or

What Jones is saying, without actually coming out and saying it is that members of the AFSCME union, either directly, or indirectly illegally attempted to enter the city's payroll program in an effort to change the payroll of the individuals involved.

That is a crime!  Even though this scheme was uncovered, it was a criminal conspiracy willfully engaged in by Sean Moy and unnamed others to illegally alter the payroll of city employees without proper authorization, plain and simple.

On receiving this information I contacted Ted Gupta, the city's Independent Auditor to inquire whether he had been directed by the City Manager to conduct an investigation of this activity?

His response was that he didn't know what I was talking about.

No one had informed him of any of this activity, and certainly no one had requested that his auditors conduct an investigation of the city's payroll system.

Furthermore no one it seems has been punished or called to task for any of this.

This on its own would be bad enough, but what should alarm all of the citizens in the City of Miami is that no one can with any assurance or authority claim that this was an isolated case.

The city has a budget of over $1 BILLION DOLLARS, and within that BILLION DOLLARS there are lots of opportunities to cook the books, and make money appear or disappear by a few key strokes on a computer, all without fear of punishment or even a reprimand.

Miami has become an organized criminal conspiracy under the watch of Colonel Klink and Boy-Toy Mayor Francis Suarez.

HERE IS THE MEMORANDUM OF UNDERSTANDING

It's actually hilarious now to think that Colonel Klink supposedly hired Adele Valencia as the new Director of Code Enforcement to deal with Joe Carollo and to, as she was eager to claim after she arrived, to clean the department up.

If anything, the department is now considered one of the worst run in the city, both as a place of employment and as a department that doesn't treat its citizens fairly.

In the coming days I will provide explosive information to back up these claims but before I do, here's an example of just how dumb Valencia - "I'm a really smart lawyer" - was played out of pocket by Sean Moy, the President of AFSCME Local 1907.

For those who have forgotten, and yes, it's sometimes is hard to keep track of all the various scammers on the public payroll, or remembering what chicanery they've been up to, Sean Moy first showed up in a Crespogram story when he and Mary Lugo, a member of the AFSCME local's Executive Committee were exposed as playing prominent roles in Carollo's efforts to use the city's code enforcement office to go after Little Havana businessman Bill Fuller.

Moy next turned up when I revealed how he had gotten a promotion to the no-show executive position of Chief of Code that came with a salary of $92,000, plus benefits.

This incident remains one of the sleazier deals in a boat load of sleazy deals that have been "negotiated" by City Manager Emilio "Colonel Klink"Gonzalez, whose behavior, or lack of when it comes to being a competent manager actually makes me happy to know that he's no longer in the US Army, because our country has more than enough problems today without having a poser and incompetent ike Gonzalez anywhere near a position that could do the kind of harm to our country that he's done to the City of Miami.

When it comes to Sean Moy on the other hand, he figured that since he had bamboozled his way into a no-show job because he was more cunning than the Klinker and the others who were supposed to be protecting the taxpayer's money, he decided that his next scheme at bamboozling the morons in the Suarez administration was to trick Adele Valencia into going along with a scheme that he had already been told was not acceptable to the city.

Here is an explanation of the scheme in an email written by Assistant City Attorney Kevin Jones that spells out what Moy did, and how he took advantage of Valencia's ignorance. I've highlighted the juicy parts.