FOR YEARS JAVIER ORTIZ HAS BEHAVED WITH BRAZEN IMPUNITY. HE'S ASSAULTED CITIZENS, COMMITTED PERJURY, MANUFACTURED FALSE EVIDENCE, ENGAGED IN RACIST AND MISOGYNISTIC ACTS, AND CLAIMED THAT HE WAS A BLACK/ NON-HISPANIC MALE IN ORDER TO GAME THE SYSTEM TO JUMP TO THE TOP OF THE PROMOTIONS LIST FOR LIEUTENANT AND CAPTAIN. HE'S GOTTEN AWAY WITHALL OF THIS  AND MORE BECAUSE HE'S BEEN PROVIDED PROTECTION BY MIAMI CITY OFFICIALS INCLUDING MAYOR FRANCIS SUAREZ AND POLICE CHIEF JORGE COLINA. THOSE DAYS HOWEVER MIGHT BE COMING TO AN END

Miami New Times reporter Jerry Iannelli has done a great job over the years writing about Javier Ortiz, including his story several days ago on the death of Yoinis Cruz Pena, who flew off his motorcycle on the Rickenbacker Causeway Exit Bridge on May 27, 2018, in an accident that was alleged to have been caused by, "being chased off the highway by Miami police officers."

Iannelli's story revealed revelations uncovered by the City of Miami's Civilian Review Panel (CIP), that detailed not only inconsistencies, but what appeared to be outright lies from several of the officers involved in this incident. Members of the CIP went so far as to allege that the police response to the CIP's investigation was, "incompetent," "shoddy," "and possibly a "cover-up" by the MPD." You can read Iannelli's story HERE.

One of the issues raised by the CIP, and reported by Iannelli was that, "In July. the CIP uncovered some astounding facts about he case, including that basic crash evidence did not wind up on official reports, that MPD's internal affairs unit seemingly his or ignored evidence that Miami cops were conducting a traffic-enforcement operation nearby that day, and that a GoPro camera Cruz Pena wore on his helmet allegedly collected no crash footage and somehow recorded only after he hit the ground."

The comment about ignoring evidence that Miami cops were conducting a traffic-enforcement operation that day rang a bell with me, because I had been contacted by sources inside the police department when this incident occurred, and had been told that Javier Ortiz had been involved in some way.

For whatever reason - I often get so many calls about stories that I can't possibly focus on all of them - I had passed on covering this story, but since Ortiz had shown up at City Hall last month to challenge Joe Carollo over his status as a U.S. Marine, I had put Ortiz back on my, Pay More Attention To This Asshole list.

Thanks to a Crespogram reader, I soon was able to obtain documents that support the claim that the MPD's IA Unit was at best incompetent, and more than likely complicit in engaging in the cover-up alleged by the CIP members.

Here are the documents that support this claim.

First, is a copy of the Internal Affairs Report on the investigation of the accident. 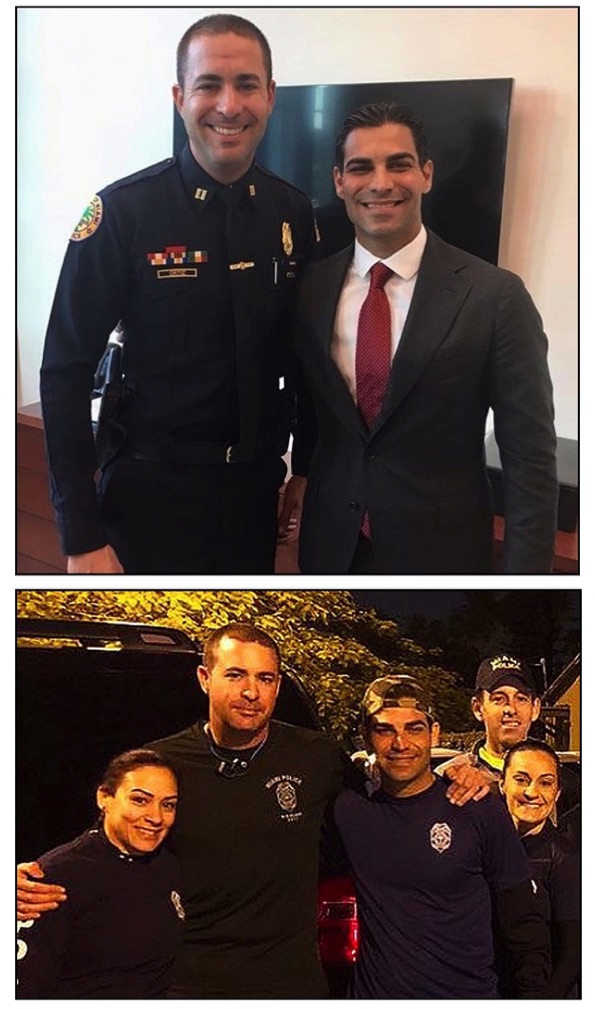 IA Report of Investigation by al_crespo on Scribd

At the bottom of the last page is the following paragraph:

The claim made in the report by IA was that there wasn't an Operational Plan.

Unfortunately for them, there was.  Here it is:

OPERATIONAL PLAN.pdf by al_crespo on Scribd

If you scroll to the last pages, you'll find these 2 pages which surprise, surprise, reveals that Captain Javier Ortiz, was the commanding officer for this operation.

How could IA claim there was no Operational Plan, yet I was able to get my hands on it without any trouble?

The discovery that Ortiz was the command officer in direct charge of the officers involved in the chase of Yoinis Cruz Pena, demands an answer of what roll did he play in the alleged cover-up?

Javier Ortiz has been recognized as a very dangerous police officer who in the past has been involved in cover-ups; the most flagrant was the one where he fabricated the Response Of Resistance Report in the case of  Jesse Campodonico, who was beaten and tasered by Ortiz and some of his pals at the ULTRA Music Festival in 2013. All of the officers involved in that case committed perjury during their depositions, but the State Attorney's Office refused to prosecute anyone, and the civil lawsuit resulted in a $400,000 payment to Campodonico.

The time is coming when Colina's failure to deal with Ortiz is going to come back and bite him in the ass, because come next week, there will be 4 votes on the City Commission to fire Emilio "Colonel Klink" Gonzalez, and once he's gone you can absolutely bet your money that one of the things that the next City Manager is going to have to agree on in order to get the job is to fire Jorge Colina, because Carollo has had it in for him ever since Colina talked back to him at the Commission meeting back on Valentine's Day.

Once he's accomplished that, one of the things that the next Chief will have to agree to if he/she wants to be Chief is to deal with Ortiz.

This is how personnel changes get done in Banana Republic of Miami, bitches!