IT WAS A SHIT SHOW THAT HAD PEOPLE WALKING OUT AFTER THE CANDIDATE FORUM WONDERING WHAT THE FUCK IS GOING ON IN THE CITY OF MIAMI THAT PEOPLE THIS CRAZY WOULD ACTUALLY THINK THAT THEY DESERVE, OR SHOULD BE ELECTED TO PUBLIC OFFICE 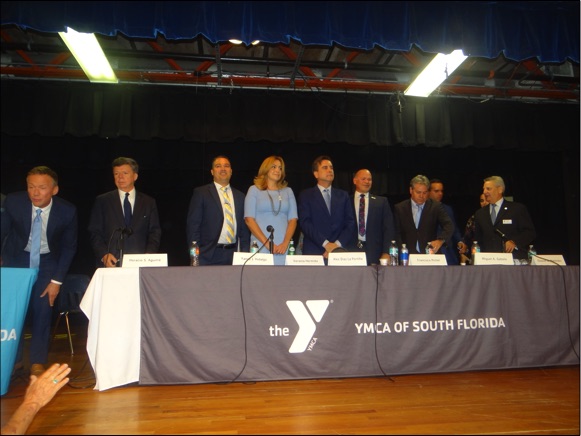 Normally, I just post the videos of various community events without comment, because I figure that any comments that I make would be superfluous, but the candidate forum in Allapattah for the District 1 City Commission seat being vacated by Willie Gort will probably go down as an event that people who did attend will forever remember, and always describe by starting with the words, "You shoulda been there."

Without question, if the forum last night was a contest to discover who was the craziest candidate - Mirror, mirror on the wall, who is the absolute batshit craziest of them all - that honor would go to Frank Pichel, who at one point stated that if he was elected the very first thing he would do the next morning would be to go to the headquarters where the trolly buses are kept, steal one, and begin driving it in the district.

His best line of the night - among some strong contenders - was when in summing up why folks should elect him he made it a point to remind everyone that among his many community accomplishments that qualified him to be a city commissioner were the people he had shot in the district during the years he was a cop.

I have written about Pichel before, (HERE, HERE & HERE,) and done my best to point out how batshit crazy he is, maybe as a result of ingesting too many of those drugs he was accused of selling while he was a cop, but the only reason that he should ever get elected to the city commission was if the city beforehand sold the television rights to the City Commission meetings for big bucks, because putting Pichel on the same dais with Joe "Comemierda" Carollo would definitely become, Must See TV

Speaking of "Comemierda," the speculation is that two, and possibly three of the candidates are allegedly considered as Carollo's flunkies including of course Diaz de la Portilla and Pichel. Who the the third one might be depends on who you talk to, but along with the speculation about that relationship, it was clear from their comments last night that Diaz de la Portilla and Eleazar Melendez are both in the pocket of Jorge Mas when it comes to supporting the Soccer Stadium Deal, including Diaz de la Portilla's claim that by law the city is now required to negotiate a deal with Maz over the property, which is a bald faced lie.

In truth, if they negotiate a contract that the commisison does not find acceptable, the commisison then has a right - as Carollo revealed in one of his stopped clock moments, and I wrote about - that they could then put the property back out for an RFP to allow other bidders to offer proposals on what they would do with the property, and for how much more than the $3.4 million annual rent.

On the other hand, Melendez has been telling folks for a while that he expects to get serious money from both Boy-Toy Mayor Francis Suarez and his former boss Commissioner "Sellout" Russell in the weeks before the election because of his willingness to be on their side on this issue.

Miami is one of those places where so-called forward looking progressives  show heir willingness to start selling their votes to the yahoos and scammers even before they get elected.

Some of the other candidates also didn't fare much better, in part because they were clueless as to what they can, and what they can't do as a city commissioner, and also because the moderators didin't seem to know either, because asking a candidate for the city commission seat in Miami to speak on what they'd like to do for education - a city commissioner is not a school board member - is a waste of time, especially as it was pointed out by Hermida that there were so many issues and subjects that shoulda, coulda been raised that weren't.

Savvy moderators - in fact these guys both looked and acted as they were overwhelemed just being there - could have dealt with the allegations surrounding the destruction of absentee ballots in Diaz del la Portilla's last race for County Commission, and the loss of his parent's house as a resulte of multiple code violations, but then again, they'd have to have been acquainted with these issues, and neither one to my knowledge ever covered these stories. Both stories appeared first on the Crespogram. (Absentee Ballots, Code Enforcement, Code Enforcement.)

Things got so crazy, that after 51 minutes my camera decided to punish me for bringing it to such a shit show and quit recording, so I apologize, first that my video only includes the first 51 minutes, and secondly, that it seems that YOU TUBE is having a major problem allowing videos on their site to be shared, and so if you want to watch the video you'll have to do a copy /paste with this link: https://youtu.be/SivuobGWapw