THE #SAVEWYNWOOD PEOPLE DECIDED TO FIGHT BACK BY RAISING QUESTIONS OF UNETHICAL AND AND ILLEGAL BEHAVIOR IN AN EMAIL I SENT TONY ALBELO. TRULY, THESE GUYS ARE MORONS WHO GOT COW SHIT FOR BRAINS

Sometime in the last few hours a story was posted on the #SAVEWYNWOOD site about an email that I had sent Tony Albelo of SWARM , asking him to respond to 5 questions as part of PART II of my series on the goings on in Wynwood.

I had sent BLIND copies of that email to three other people, Manny Gonzalez, the Executive Director of the Wynwood BID, Commander Dan Kerr, who is the Commander of the Wynwood District, and Carlos Gimenez Jr., a local lobbyist and son of Miami-Dade County Mayor.

I have posted the fill story posted that appeared on the  #SAVE WYNBWOOD site below, so that you can read it.

I am also reposting the supposedly most damning parts - or at least  the parts that in Moishe Mana and Tony Albelo's eyes are most damning - so you can not only read them, but by the time that I finish taking them apart, you will realize that when I raised the question of how could a supposed billionaire like Moishe Mana be so stupid as to not have hired some serious, top notch legal talent to keep him out of the predicaments he keeps getting in, you will see that he's gotten himself into another fine mess.

So first, here are the allegations they make. 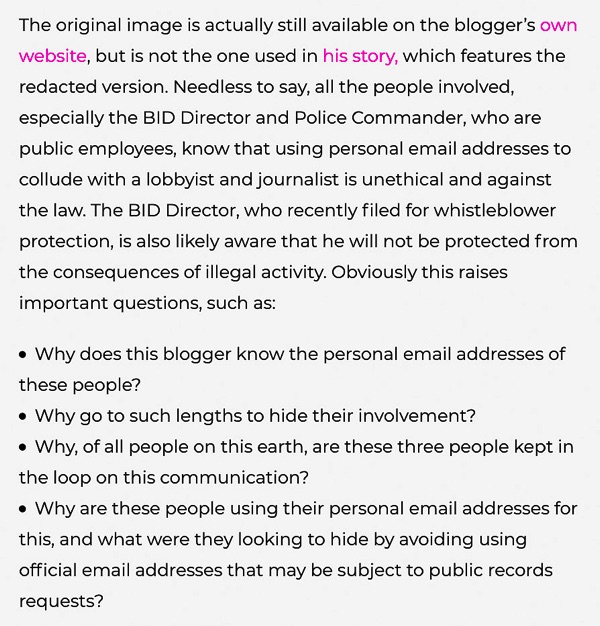 Here are my step by step explanations and rebuttals.

First, even though I am not a lawyer, I am considered by many people all over the state as one of the best non-attorney experts on Florida's Public Records Law in Florida.

I have sued the Governor, the Florida Lottery, the Florida Film Commission, and numerous individual film commissioners, as well as the Executive Director of the Miami Parking Authority, a former Miami Chief of Police. the City of Miami and the Downtown Development Authority over public records.

In all but one case - that being my very first case - I have never lost a public record lawsuit in over 25 years.

That being said, the first allegation made is: "The BID Director and Police Commander, who are public employees, know that using a personal email address to collude with a lobbyist and journalist is unethical and against the law."

That is not true on several fronts.

Many, if not most public officials in Miami and in Florida use both private emails and private cell phones in conducting business. It would be better if everyone only used public email accounts, and I myself have bitched about that for years, but it is not illegal to do so.

It does not matter whether you use a government email, or a private email, all are public for purposes of Florida public records law if they are used to conduct public business.

My sending unsolicited emails to anyone is neither unethical or illegal or an act of "collusion," and in this case neither Gonzalez or Kerr asked me beforehand, or responded to the email I sent them, neither via email, or by phone.

Here is the detailed explanation from the Florida Sunshine Manual, Page 80, 2019, that explains emails. 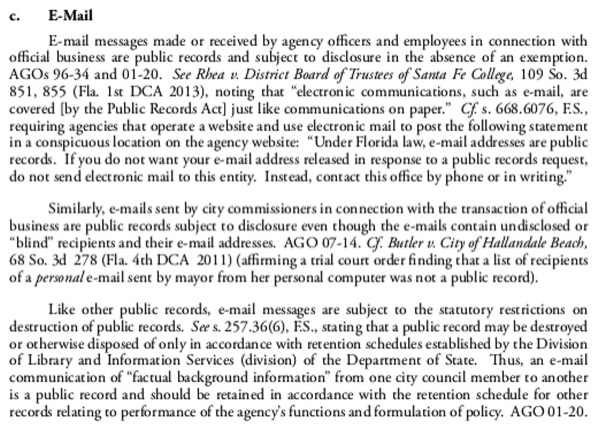 So Mana and Albelo, and whoever else's claim that my sending them an email to their personal email account was either unethical or illegal is factually false on its face.

Right there these guys have managed to put their dicks in a meat grinder, by making those accusations.

Next is the breath taking question of, "Why does this blogger know the personal email addresses of these people?"

Simple, I know Manny Gonzalez's personal email address because before he was the Wynwood BID Director he was the Coconut Grove BID Director, and in my lawsuit against the city, a lawsuit which the city settled by paying my attorneys fees of $10,000  and giving me the documents that I had requested 3 years previously I had had to subpoena Manny to get him into a deposition. In fact, as part of that lawsuit I also filed a public records request for his emails at the time.

I am an investigative reporter, collecting email addresses and phone numbers is part of what I do and how I can manage to reach out day or night to people I need to ask questions of.

That what people like me do. Ask question, piss people off and sometimes call them in the middle of the night.

When it comes to Commander Kerr, he and I have been neighbors for years .  I was very clear in Part II of my series, before introducing the first of several emails that Kerr had written to reveal that he and I had a personal relationship.

Here is what I wrote:

In full disclosure, I have known Commander Kerr for

as long as I've written this blog because he happens

to be a neighbor of mine in Miami Shores where over

about what goes on in our little Village.

I was not aware however, until I started obtaining

from the Wynwood BID about how unpopular Kerr had

become among this group who had decided to challenge

the direction originally agreed upon by the original

entrepenuaers and business people who were instrumental

in seeing a future for the Wynwood District.

The only email address I have for Dan Kerr is the one I used, which is the one that on occasion I send him stuff about Miami Shores.

I do feel bad about Carolos Gimenez Jr's name being inserted into this mess  because he had absolutely NOTHING to do with any of this.

The accusation that somehow Gonzalez and Kerr were colluding with Gimenez on the basis of their emails addresses appearing in an email I sent Tony Albelo reveals the astoundingly bad quality of legal advice these guys are receiving, if they were even bright enough to ask for r legal adice before posting this attack story.

For the record, I had left a message for Carlos to call me because I had heard a rumor that someone that he had previously been in business with in Washington D.C. was supposedly coming down to Miami, and I wanted to know if he knew anything about it.

When he called me back we talked about that, and he asked me what I was writing about and I told him I was working on a Wynwood series and that I had just finished the email to Albelo.

I told him I'd send him a copy for shits and giggles because I have in the past written about him, and just added his email address as a BLIND copy and sent it.

He was the one who called me the next day and told me that I had posted the email with his address, and some people were calling him up asking about it, and he asked me if I would remove his email, because understandably he didn't need people questioning him about something that he had no involvement with.

I immediately said yes, pulled up the email, and just took off all the other emails as well.

So I want to be very clear about this, there was no conspiracy or scheme in trying to hide ANYONE'S involvement,      but I do feel bad for not paying attention to those email addresses before I attached the email to my story.

Not because I, or they did anything wrong, but because of the opportunity that my actions caused in giving these morons what they think is some deep dark secret of collusion to distract everyone from the stupid shit they've been doing.

I started my investigation about the goings on in Wynwood by sending Manny Gonzalez a very detailed public record request, and followed that initial request by sending him several other requests, as well as calling him several times as I waded through the documents to ask him questions because there were things that I wanted to make sure that I got right, which is another thing that is not illegal.

That's why I also sent Albelo an email with questions.

The difference is Albelo never answered, so any claims he, or any of his pals now makes about my getting something wrong - which from the feedback I've gotten from many involved in this one way or another tells me that I didn't get anything wrong - is his fault.

I asked, he didn't answer.

The only people that seem to be trying to hide stuff are Moishe Mana, Albelo and their pals, as evidenced by the story posted by Alexi Caronda, of Miami new Times, about the confusion over whose actually behind #SAVEWYNWOOD.

I would venture to say that if anyone could get their hands on the cellphones for these guys you'd probably find private phone numbers and emails for a lot of public officials, such as the one that one of these guys has for someone in Code Enforcement who they allegedly can call and give instructions to.